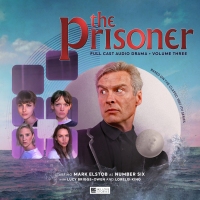 I’ve been fighting for so long. That’s all I’ve become. The fight itself. The fight for freedom. And if that fight is over. Who am I? What’s left of me?

The Prisoner Volume Three is now available as a collector’s edition box set or via download from £19.99 at www.bigfinish.com

With an ending very different from the original TV series, the box set has already been well-received. Nicholas Briggs said: “It’s been absolutely lovely and such a relief that people like what we’ve done. I knew I was entering controversial territory so there was a big danger that our version would be seen as terrible, sacrilege, or at the very least an irritating irrelevance. So many people have been really generous and encouraging.”

Here are some extracts from the pre-release reviews. The first is written by Rick Davy of The Unmutual, a news website dedicated to The Prisoner:

“In terms of audio drama, there are few greater visionary talents in the medium than writer, director, and executive producer Nicholas Briggs, and he has delivered his strongest set of episodes yet. Big Finish’s Series 3 of The Prisoner is the zenith of its output, a triumph of nerve-tingling tension and storytelling with some truly frightening and foretelling moments which rank at the very top of the franchise’s peak.”

The second is written by Debs McDougall from Six of One, The Prisoner Appreciation Society:

“The writing is nothing short of a masterpiece and the voice actors are all amazing, none more so than Mark Elstob as Number Six.  Some of the episodes were recorded out of order just like in the original TV series, the voice actors doing a marvellous job of working out where they were in the plot! The ending is not what I expected and is cleverly written to leave a door open, once again, just as in the original series and maybe as controversial? Nick Briggs has very cleverly kept the essence of The Prisoner alive.  A must for all Prisoner appreciators.”

Time for an election in the Village. The regime seems to want Six to stand as a candidate to be Number Two. But when Two’s manifesto seems to be based on the notion of freedom, what platform will Six decide to stand upon? And can there ever be freedom in the Village?

The Girl Who Was Death

Six finds himself free again, back in London. But how did he get here? An explosion rocks the city and Six must work out who he can trust. Will it be Control, Danvers, Number 43, Kate, Number Two or Potter?

Potter and ZM-73 think that if they go back to the beginning of it all, they’ll be able to solve the mystery of the Village. But can Professor Jacob Seltzman really provide all the answers?

No One Will Know

From London, to Kandersfeld to the Village… will an end to it all ever be possible?

The Prisoner Volume Three is available now as a collector’s edition box set at £24.99 or on download from the Big Finish website at £19.99.

Based on the classic ITV series originally created by and starring Patrick McGoohan, The Prisoner is the story of a man known only as Number Six. He has committed no crime but is being held against his will in ‘The Village’ – a location from which there is no escape.

Number Six can trust no one and is under constant supervision by his ever-changing adversary Number Two – the leader of the Village. Number Six attempts to trace the real identity of his captors, and the mystery of the ever-elusive Number One, but is forever thwarted. A mysterious large white orb known as ‘Rover’ helps to maintain order, and will engulf any who attempt to escape.

Big Finish Productions is an audio production company and publisher best known for its range of Doctor Who plays (with its many spin-offs). The company also produces a wide range of audio drama and audiobooks featuring the characters from Blake’s 7, Space: 1999, Dark Shadows, 2000AD (Judge Dredd and Strontium Dog), Terrahawks, The Avengers, The Prisoner, Survivors and The Omega Factor, as well as classics such as HG Wells, Shakespeare, Sherlock Holmes, The Phantom of the Opera and Dorian Gray. Big Finish also produces original creations such as Graceless, Charlotte Pollard and The Adventures of Bernice Summerfield, plus the Big Finish Originals range featuring seven great new series including ATA Girl, Cicero, Jeremiah Bourne in Time, Shilling & Sixpence Investigate, Blind Terror and Transference.