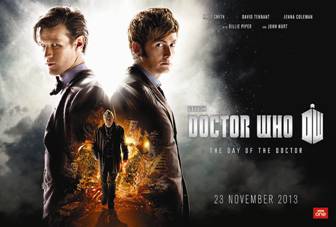 Hundreds of thousands of fans across the UK, Ireland, US, Canada, Germany and Russia will gather to watch on the big screen at the same time as millions of TV viewers worldwide

BBC Worldwide today announces that the special 50th Anniversary episode of Doctor Who will also be screened in 3D in cinemas across the UK, Ireland, the US, Canada, Germany and Russia at the same time as the UK TV broadcast on BBC One on 23rd November 2013, with more countries to be confirmed within the next few weeks.

In addition to the global TV broadcast, hundreds of cinemas in the UK and around the world are also confirming their plans to screen the hotly anticipated special episode simultaneously in full 3D, giving fans another unique opportunity to be part of a truly global celebration for the iconic British drama series. 216 VUE, Cineworld, Odeon, BFI and Picturehouse cinemas in the UK and Ireland have already confirmed their participation, with tickets for the anniversary screening set to go on sale this Friday October 25th at 9am. Locations include London, Birmingham, Belfast, Dublin, Liverpool, Cardiff and Edinburgh.

Internationally, German, Russian, American* and Canadian* fans will gather in cinemas to enjoy the simulcast release, approximately 30 cinemas in Germany will screen the special and up to 50 theatres will debut it in Russia. The celebrations will cross time zones travelling over the equator to New Zealand and Australia where fans will have a choice of 106 cinemas across both countries to view the episode in 3D on the big screen on the 24th November following the simulcast TV broadcast earlier in the morning.

Full details of participating countries and cinema chains, plus specific booking details can be found at http://www.doctorwho.tv

In addition to Matt Smith the one-off special, entitled The Day of the Doctor stars former Time Lord David Tennant and Jenna Coleman with Billie Piper, and John Hurt.

The 50th Anniversary weekend for Doctor Who in November will also see over 20,000 fans gather at London’s ExCel for the official celebration event which will feature appearances from cast old and new including Matt Smith and former Doctors Sylvester McCoy, Colin Baker and Tom Baker. Further information on the event can also be found at http://www.doctorwho.tv

Since 1963 Doctor Who has been one of the best loved dramas and certified by the Guinness Book of World Records as the most successful sci-fi series ever. The show has received numerous awards across its 50 years and has seen huge commercial success with over 10 million DVDs and 8 million action figures sold globally. It is also the number one BBC show on iTunes in the UK. BBC Worldwide, the commercial arm of the UK broadcaster distributes Doctor Who to over 200 territories across the world. Doctor Who is produced by BBC Cymru Wales.

*BBC AMERICA will this week announce details regarding the 3D screenings of the anniversary episode in select theatres across the US and Canada.]]>